Hit enter to search or ESC to close
Animal Management

It might not have the bells and whistles of a traditional birthing suite, but the “maternity ward” at Marrabel is proving to be a success in post-partum care for Mernowie Poll Merinos.

The stud has been able to increase lambing rates to more than 130 percent by bringing their ewes ‘indoors’ at lambing time.

In 2016, David and Paige Rowett and David’s parents Ian and Roz from Mernowie Poll Merinos were hit with 40 millimetres of rain overnight– right at peak lambing time for their artificially inseminated (AI) ewes.

They moved several ewes into a shed to lamb down – and it worked so well, last year they did it on a much larger scale. The Rowett’s conduct an extensive annual AI program.

Split into four, this year it will be boosted about 10 percent and include about 900 ewes in total. In 2020, three mobs will lamb in April with the fourth due in June. This year capacity will increase by about a third, with extra pens being installed to boost holding capacity from 126 to 170 at any one time.

According to David, despite being “pretty full-on”, the system has numerous benefits. It utilises a reasonably new multi-purpose shed near the sheep yards, which is also used to store hay, machinery and hold the annual on-property ram sale and it allows them to gain pedigree information on all lambs and prevents mis-mothering.

Divided into small pens, each one is constructed of interlocking panels and has a light layer of bedding straw and has individual feed bins. Water is delivered via a continuous 150mm PVC piping with round hole cut in top for individual access. Straw is topped up as required and again for the second program. Straw is then replaced for the third lambing and topped up as required. A Bobcat will make pen cleaning a lot easier this year. 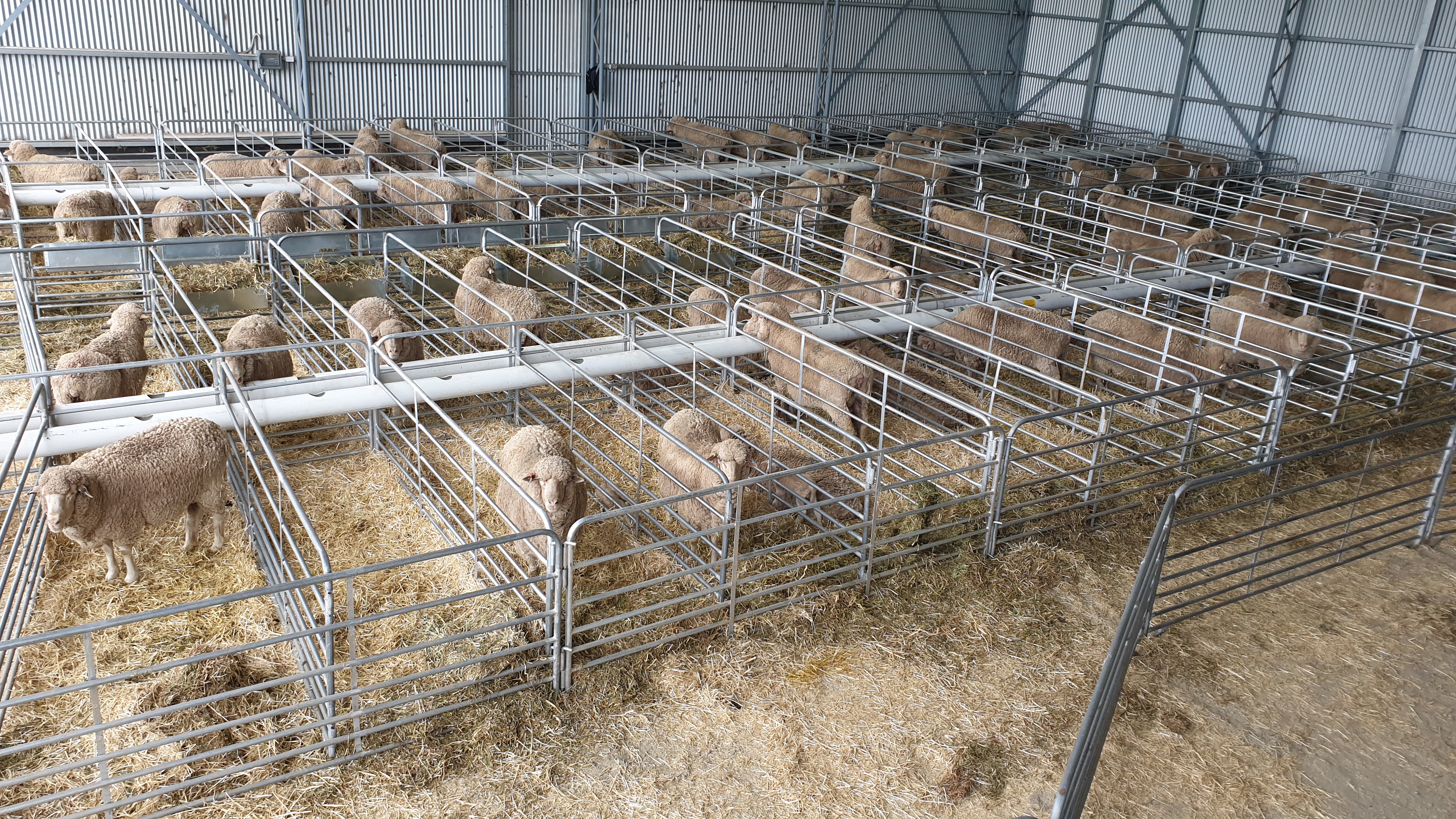 When the first couple of ewes in each AI program start to drop their lambs, the mob are walked into the shed and penned up.

Because they have been synchronised by AI all are likely to drop within five or six days of each other.

“They settle down very quickly in their pens with the odd skittish one culled from the flock.

“Surprisingly, the hardest part has been to get ewes with their lambs to move out of the shed as they have a very strong mob instinct.

“We will use a different system this year. They will return to nearby paddocks via a new doorway at rear of shed to get them back to paddock the quickest way practical.”

Once the lamb has been born, David is able to tag and record the pedigree – a job that he says is much easier to do when the animals are in the individual pens rather than in a mob in the yards or paddock.

It also avoids the need for expensive DNA testing to match pedigrees, which can cost in excess of $23/head. Another benefit they have found is they are able to better observe the mothering ability of each ewe when taken out of its natural environment.

“Mernowie ewes are good mothers, the result of over 30 years of selection,” David says.

“Ewes failing to rear a lamb each year will be culled.

“We intend to udder score the ewes this year which will help us identify a few poor milkers which we may also cull.

“Ewes that have multiple births need to have more milk, especially in a year like last year when paddock feed was very light on.” David says reducing mis-mothering was a major aim at the stud.

“This can happen with large numbers of newborn multiple birth lambs following their mothers to water or shade at the same time,” he said.

“We estimate we are saving at least 10 percent more of the multiple born lambs.

“Given the investment we have outlaid on genetics, this will give us a very good return on current sheep values. Lambing in paddocks with very minimal feed in 2019 would have been disastrous.”

How long in the maternity ward?

Single lambs and their mothers generally spend about half a day in the shed before being walked back to the paddock. David says twins and triplets spend a little longer in the ‘maternity ward’ – usually “as long as needed but about two to three days”.

“We walk through the shed a couple of times a day for feeding, tagging and shifting any that are ready to go back to the paddock, besides that we keep away from the shed as much as possible,” says David.

“In an ideal world you’d have a paddock in the front of the shed that they could meander out into.”

In 2019, David recorded 132 percent of lambs marked across the 4 AI programs compared to 100 percent in the natural-mated mobs. While he concedes that figure can be skewed due to the higher number of multiple births in the AI program, he’s optimistic it’s still a much higher figure than if they ewes had lambed down in the paddock.

“We now achieve much better AI lambing percentages, going from about 60 percent (and often less) to now up to 132 percent and consistently around 100 percent,” David said.

“This is largely due to a synchronisation protocol for our AI programs that we have fine tuned in recent years after extensive on-farm research.”

David initially expected the $25,000 shed investment to pay for itself in three to four years – now he says it should “easily” do that in three.

“Despite the dry year in 2019 we had serious cold wet weather events during two of the AI peak lambing periods,” he said.

“It was very comforting to hear rain on the roof and know that newborn lambs were protected.” 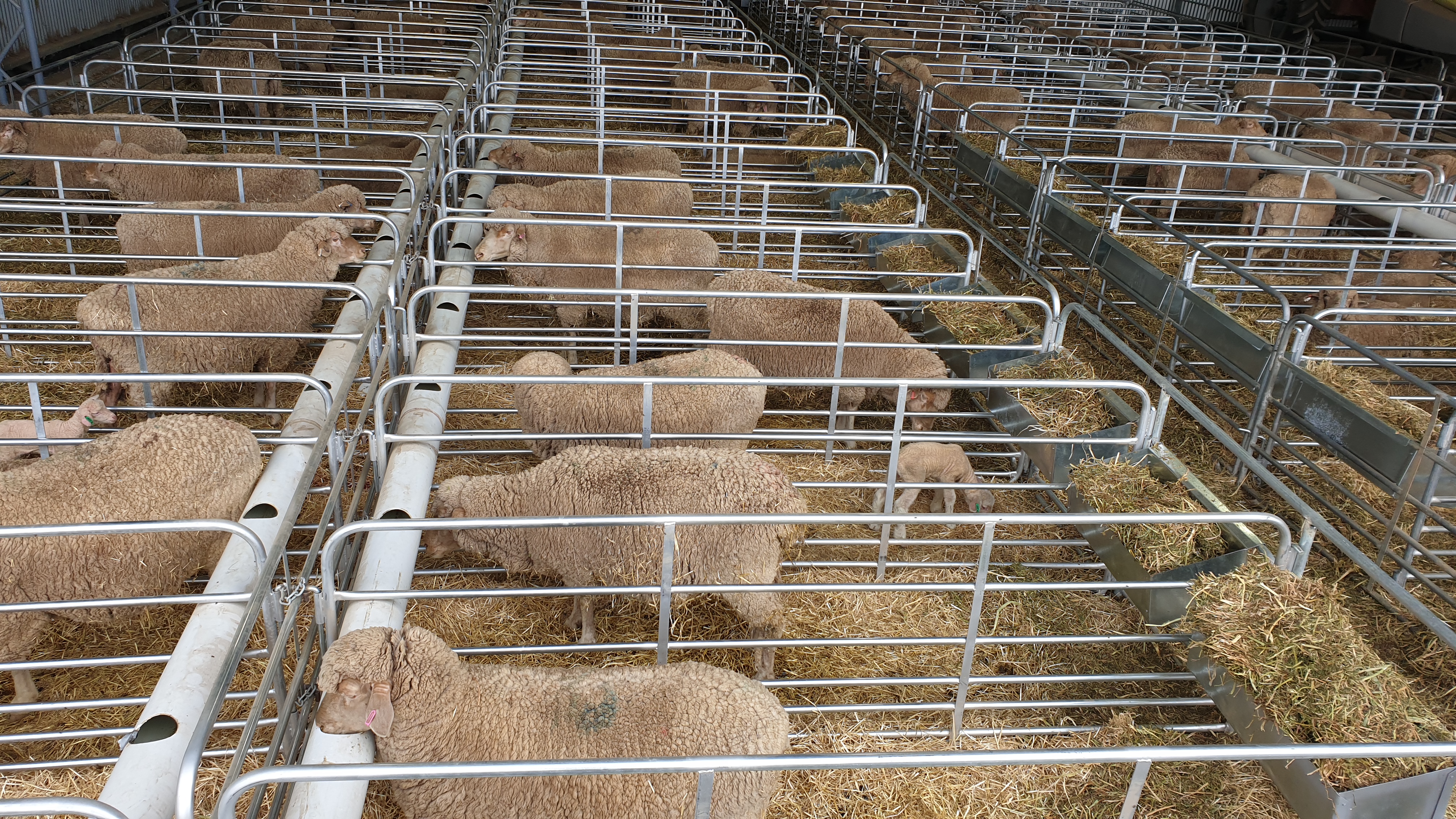 Another Article on the Mernowie Maternity Ward was published by the Farming Ahead Magazine, 13 May 2019 >