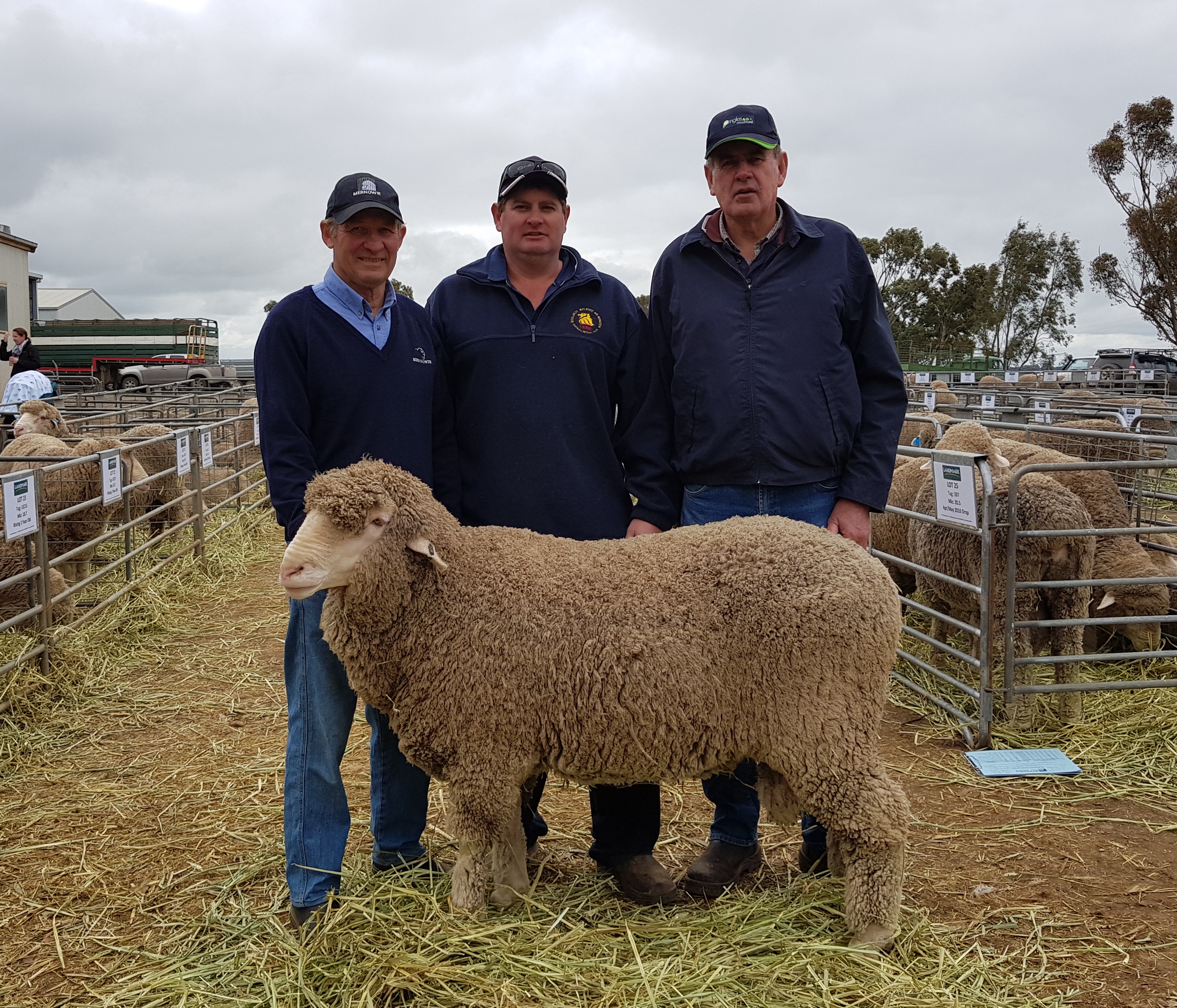 MERNOWIE Poll Merino stud celebrated its 30th annual on-property sale at Marrabel on Friday in stunning style, with a total clearance and an increase in average of nearly $400 on 2016.

A large crowd provided spirited bidding for the 103 lots offered by Ian, Roz and David Rowett, ensuring the sale average jumped to $2045.

The 18.9 micron ram weighed 106 kilograms with wool tests including 2.8 standard deviation, 14.6 per cent coefficient of variation and 99.4pc comfort factor.

Brendan Groves and his father Wayne have been clients of Mernowie for the past 16 years.

The Groves family sell wether lambs on-hook and surplus ewes are offered as two-year-olds at the Jamestown market.

Brendan said the Mernowie sheep did well in the Upper North.

“We select big-framed sires with high growth rates and good wool and plenty of it,” he said.

Kerry Rowett, Bordertown, who was underbidder on the sale-topper, bought four rams averaging $4200.

This included the sale’s $5400 second-highest price ram at Lot 8.

Kerry said he had been using Mernowie rams for many years and selected on wool type, growth and structure, and then assessed ASBV figures.

“The Mernowie sheep really are easy-care,” he said.

Morley stud principal Leonie Mills had seen the ram in an earlier inspection and her father Alex Horne was impressed with the ram at the Mid North Merino Inspection Day at the end of August.

He returned to Mernowie on sale day to secure their new stud sire.

“This sire has a very pure muzzle that stands square and is correct on its feet and legs,” he said.

“It is a heavy woolcutter with a very even wool and the right type of wool with a high comfort factor of 99.9pc.”

“These big, easy-care sheep with the correct wool type do well in our high rainfall country,” Grant Burge said.

Mernowie stud principal David Rowett said the family were very pleased with the great support from regular clients and the total clearance.

“Buyers were chasing those rams with high yearling clean fleece weights and positive carcase traits for both fat and eye muscle,” he said.

The sale was conducted by Landmark.

“The comprehensive raw data and ASBVs also give buyers extensive background on the rams offered,” he said.