Hit enter to search or ESC to close
Sheep Shows

By David Rowett September 8, 2018 No Comments

We’re excited to share that one of our top Rams (512) in our 2018 On-Property Ram Sale has taken out the top gong from 45 entries for the Fibre Meat Plus Class at the 2018 Royal Adelaide Show!

We’re also very pleased that Leonie Mills from Morely Poll Merino Stud was able to purchase 512 at our our 2018 On-Property Auction – we hope he loves his new home at Cowell on Eyre Peninsula! 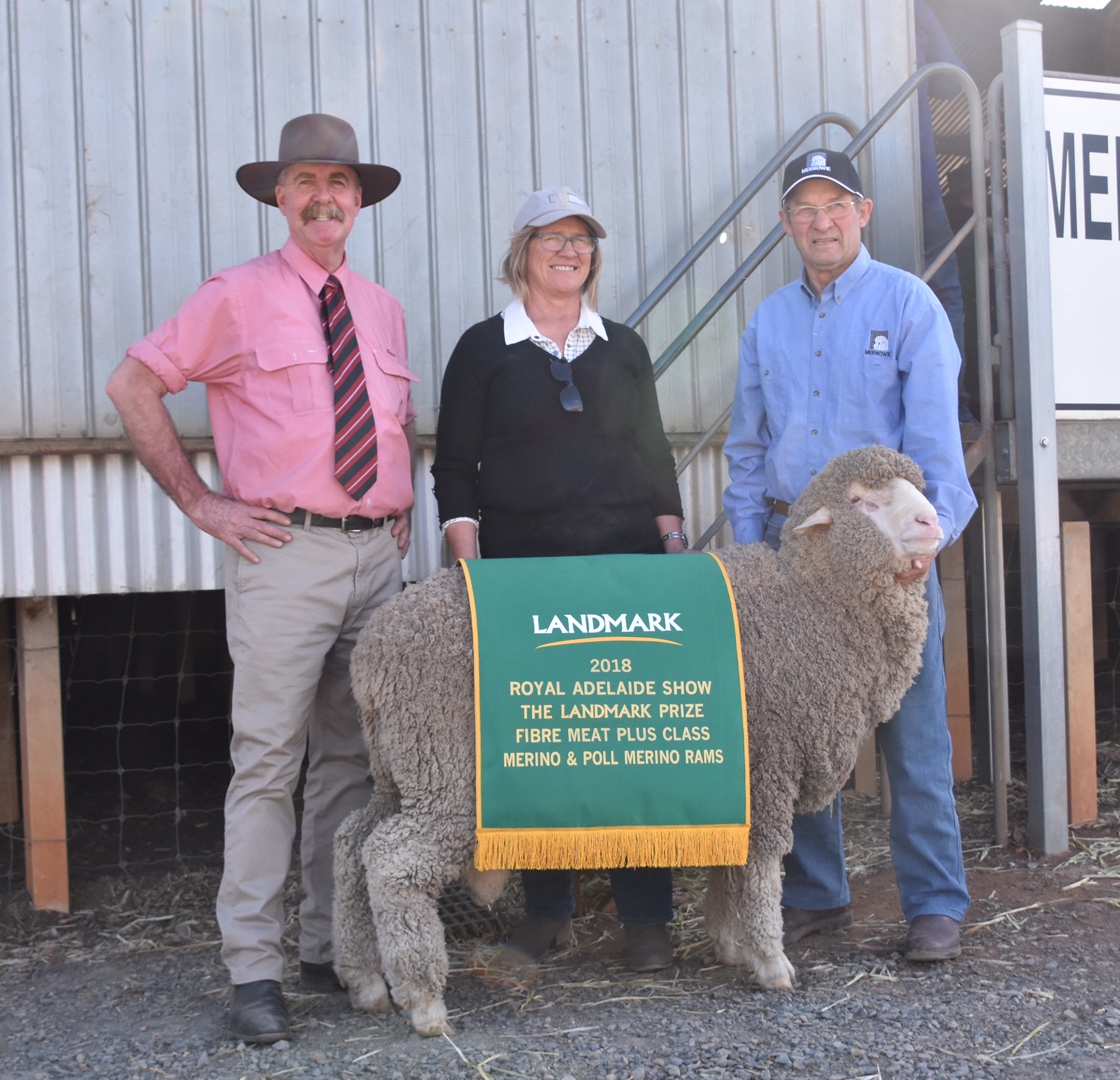 A trait leader on Merino Select’s dual purpose index from Mernowie stud, Marrabel, has taken out the Fibre Meat Plus class.

Ian, Roz and David Rowett, claimed the $2500 cash prize sponsored by Landmark with the equal finest micron ram in the class at 16.7M.

The impressive ram – Mernowie160512 – rose to the top in the class of 45 entries from SA, Vic and NSW studs also had top testing wool, including 100 per cent comfort factor.

David Rowett said the May 2017-drop, which weighed 108 kilograms, would be be offered as lot 2 during their on-property sale on Friday.

It was an AI-bred son of Willandra Desmond, which was the 2013 Australian all-purpose Merino hogget at the Australian Sheep & Wool Show in Bendigo, Vic.

Desmond sold to New Zealand for $35,000, but semen has been used in many Australian flocks.

David said embracing Australian Sheep Breeding Values had enable them to make significant genetic gains in their flock over the past five years.

The winning ram had a great balance of figures including a DP+ of 155, yearling clean fleece weight of 20.4, positive fat of 0.1 and an eye muscle depth of 0.4.

“It is the most commercially relevant class to win,” he said.

The Fibre Meat Plus class is open to March-shorn rams which are given both visual and objective scores for a final figure out of 100.

At just 0.2 of a point behind was an 18.9M ram from Wayne, Lindy and Matt Lehmann’s Flairdale stud, Cooke Plains.

Meat judge Andrew Michael, Leahcim stud, Snowtown, said the top three rams “ticked all the boxes” for good structure and a balance of carcase to fat.

“I was looking for animals with doing ability and a reasonable cover of fat,” he said.

“We need muscle for high-yielding carcases, but we need that balance of fat too, especially when there is a drought like in the eastern states now.

“People that have that balance of fat are getting higher lambing percentages and survivability.”

Mr Michael said he would have liked to have seen a high percentage of the entries with a more balanced muscle to fat ratio for their weights.